The road is there to share with driverless shuttles

Written by
EasyMile
Driverless public transport is prompting a rethink on how other road users behave on streets and highways. The result should be safer journeys for all.
Main picture 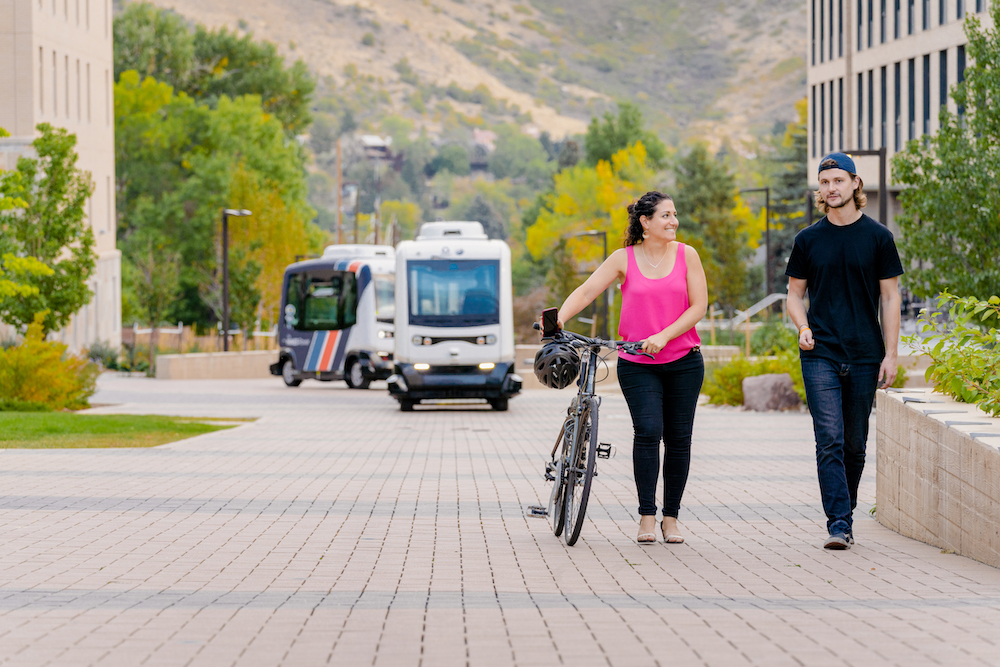 Driverless public transport is prompting a rethink on how other road users behave on streets and highways. The result should be safer journeys for all.

Ever since motorised vehicles first arrived, there’s been a never-ending juggle for room on the road –between those with four wheels, two wheels and none.

Early on, locomotives and other ‘self-propelled’ vehicles in some places couldn’t go anywhere if someone wasn’t walking in front with a red flag – protecting those travelling by foot, or horse and carriage.

Now, the pendulum has swung in the other direction. Pedestrians, cyclists and other road users often feel pushed aside in cities where the car is king. Road safety campaigners want the balance restored.

Vehicles like autonomous shuttles fundamentally change the transport mix. But, with the right approach, we believe they can help us re-evaluate behaviour on our roads and create a safer environment for everyone.

Adapting to the shared AV

It's been four years since we first deployed driverless shuttles with Level 4 autonomy. And our earliest pilot schemes threw up some interesting results.

Over an initial 600m route, we kept a close eye on our EZ10 shuttle for any technical issues so we could make our technology more robust.

Over the course of a 10-month trial, with passengers and the support of a remote supervisor, we were pleased to report no manual stops (where passengers or supervisor intervened or pressed the emergency stop button). The technology was successfully adapting to its surroundings and proving itself a safe and reliable form of transport.

Nevertheless, there were times the vehicle did have to stop unexpectedly. In around half of these cases, stops were due to ‘misbehavior’ from external users. That is, actions you wouldn’t usually expect in conventional traffic. Either people were stepping out in front of a shuttle to try and catch it – or even, in some cases, ‘testing’ how the autonomous shuttles would react. In a further quarter of cases, the shuttle stopped when pedestrians tried to cross the street without warning. Each time, the vehicle performed as it had been programmed to - for the safety of those in and around it.

Since then we have deployed more than 10 remotely supervised autonomous shuttle services around the world (the highest number on the market to date).

These lessons nevertheless serve as a good reminder that it takes time to adapt to any changes in the transport mix. We all have to learn how to share the road.

A safe and cautious driver sharing the road responsibly

So how can autonomous vehicles do this and raise overall safety levels?

Firstly, as developers of driverless technology, we focus on how our own vehicles act, making sure they are as safe as possible around other users.

Think of an autonomous shuttle as a cautious driver, one who is always alert to other hazards and considerate of other road users. In other words, shares the road responsibly. Travelling at a steady and predictable speed, the first course of action isn’t swerve out of the way, sound the horn in frustration or speed up to avoid the hazard. It’s stop.

This safety chain is hard-wired into the shuttle’s programming, with a range of sensors including lidar, radar and cameras ensuring the shuttle will always act in a way that’s safe for passengers – and others around the vehicle.

So, if you take an example of a person stepping out into the road without warning, or a car changing lane unexpectedly, in all situations the autonomous vehicle will perform as programmed – stop safely to prevent a collision.

Education is the key

Our next step then is helping other road users to adapt.

A key element here is education. The more people know about autonomous vehicles, the better they can understand how they will act in real-life traffic situations.

There’s already been a lot of progress made on this front. In the US, research from PAVE (the Partners for Automated Vehicle Education), shows that 60% of people asked would trust automated vehicles more if they better understood the technology. The coalition of industry, non-profits and academics is working to dispel common myths and engage all road users on the shape of future transportation.

And there’s an education drive in Europe too. EasyMile is one of the founding members of PAVE Europe, which is engaging the public on autonomous technology and its potential benefits at outreach events, and giving people hands-on demonstrations to help them experience driverless technology first-hand.

Making the technology more transparent is also vital. One way to do this is having more agreement on the standard times the industry uses to describe the technology. The Clearing the Confusion campaign is pushing for automakers, regulators, journalists and others to adopt a common language on autonomous driving and ADAS, as well as more consumer education on the benefits, limitations and capabilities of autonomous driving.

Find out more about the universal terms on areas including collision warnings, parking assistance, collision intervention and driver monitoring here.

Safer streets for all

History proves that the world eventually adapts as technology evolves, but all innovations require some kind of reset as people adapt also.

Previous attempts to make road users more mindful of each other have had mixed success. In parts of the US, bright yellow “Share the Road” signs tried to make motorists think more about making way for bikes, while in the UK, a refresh of Highway Code emphasises the hierarchy of road users – with the most vulnerable at the top.

We believe adding shared autonomous vehicles with increased education of road users can make a real difference and holds the potential to make all journeys safer and more efficient.